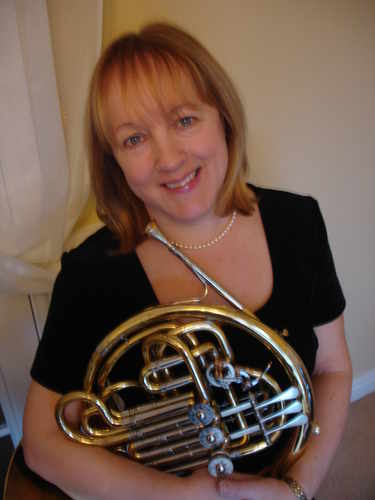 Susan was born and educated in Devon and began studying music at the age of 10. She was introduced to brass playing by the Salvation Army and at the age of 17 was appointed as the Principal Euphonium for the Woman’s Royal Army Corps Staff Band, where she was regularly featured as a soloist in concerts and on recordings including live performances on BBC Radio 2.

In 1986 she transferred to French Horn and studied under Denzil Floyd. She subsequently joined the Royal Air Force serving with the Central Band, winning the annual soloist award in 1992. Until very recently she was the Principal Horn of the Band of the Royal Air Force College in Lincolnshire until retiring after 31 years service. During this time she has been involved in several album recordings and TV broadcasts and has travelled the world extensively and performed in all the major concert venues in the UK. High points include a coast to coast concert tour of the United States of America and HM the Queen’s Diamond Jubilee celebrations at the British High Commission in India. Susan is also a qualified conductor and throughout her musical career has been Musical Director of several choirs and ensembles. Susan moved to Lincolnshire in 1997 and is the Principal Horn for The Boston Sinfonia, with whom she has been featured as a soloist, most recently performing the Richard Strauss horn concerto. Since leaving the Royal Air Force, Susan is now an examiner for Trinity College London and a registrar of Births, Deaths and Marriages, which she thoroughly enjoys.Susan is also a competent pianist and works as an accompanist for examinations and various choral societies and choirs.  She also has a busy teaching schedule and has vast experience over the last 30 years as a brass and piano teacher.